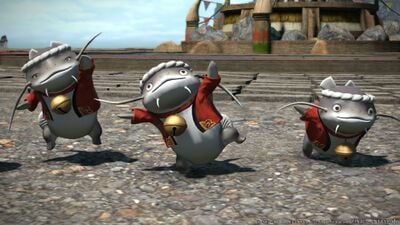 These fish-featured folk make their home in the Glittering Basin. Though they appear unintelligent, the Namazu are quite capable of speech, and some among their number have embraced civilization to the extent that they now live alongside the citizens of Doma. No few others, however, seem content to continue a primitive, mud-covered existence.

Appearing as upright catfish, the Namazu waddle about on two stumpy legs. This similarity extends to the catfish's four barbels, with a pair of the keen sensory whiskers sprouting from both the upper and lower jaw. As well as allowing the Namazu to quickly locate fish and other prey within the murkiest waters, these barbels can also be trained to achieve higher levels of sensitivity. An individual who has attained the coveted skill of "Namazu Detection" is said to be capable of divining veins of ore or water that lie beneath the surface of the ground.

Despite the apparent clumsiness of their anatomy, the fin-like "arms" of a Namazu are unexpectedly supple. Through def movement of the five bones hidden under the skin of each limb, they are able to manipulate objects with much the same dexterity as a hand inside a mitten.

Namazu are omnivorous, but prefer to consume small fish, crustaceans, and other aquatic food sources. The mud-dwelling Namazu often eat their catch raw, a practice which leads to parasite infestation and other illnesses, resulting in a considerably shorter average lifespan compared to their more cultured kin. Through their interaction with other societies, the civilized Namazu have expanded their diets to include grains and fruits, and adopted the art of cooking. They also display a keen interest in the culture of tea, and will manufacture any excuse to get their fins on a steaming cup of this favored beverage. The Namazu physiology is susceptible to some property of the drink, which induces in them an intoxicating effect identical to that of alcohol.

There is no known governing body that serves to unify the individuals of the Namazu tribe.

Having lived apart from the influence of civilized races, the piscine Namazu were long considered a barbaric and primitive people. This lowly opinion, however, was to change during the foundation of Doma some 800 years ago, when General Ganen of the noble Rijin family enlisted a number of the tribe's more adventurous souls as messengers. These Namazu swam the waters of the One River as arrows sped overhead, and delivered vital missives to an allied army on the far bank. This allowed Ganen to coordinate his forces on both sides of the river, and ultimately seize victory in the war. For the Namazu's part in unifying the factions of Yanxia under one nation, Ganen gifted them with shining bells-symbols of their deeds as "bringers of good tidings". This acknowledgement would become the origin for the Namazu's present-day sporting of bells around their necks, and signal the beginning of the tribe's integration into Doman and, to a lesser extent, Far Eastern society.

Amongst the civilized Namaxu, names are generally formed from a combination of "Gyo"-the Far Eastern word for "fish"-and another, ending syllable. This naming convention is thought to have arisen from General Ganen's response to his vassals, who opposed his plans for recruiting the services of the Namazu on the grounds that it would be akin to enlisting wild beasts. Ganen's counter argument was simply that "they are 'gyojin'. They are fishmen".

Propelled through the water by their fins and tails, and guided by their sensitive whiskers, the Namazu are highly proficient in the art of spearfishing. ALthough they hunt mainly to fill their own bellies, they will occasionally take their catches to town to sell on the street. Some few individuals even venture beyond the Glittering Basin to the Ruby Sea or the shallows around Hingashi to earn a living with their fish-spearing skills.

Following on from the Namazu's acceptance into civilized society as messengers and scouts, there were instances of the ruling family and their vassals hiring the fishmen onto their household staffs. Considering the Namazu's largely carefree-not to mention careless-nature, it could hardly be said that they were suitable candidates for such positions. As such the trend is often explained as a means for those of the nobility to visibly display generosity and affluence by offering employment to these less-than-desirable employees.