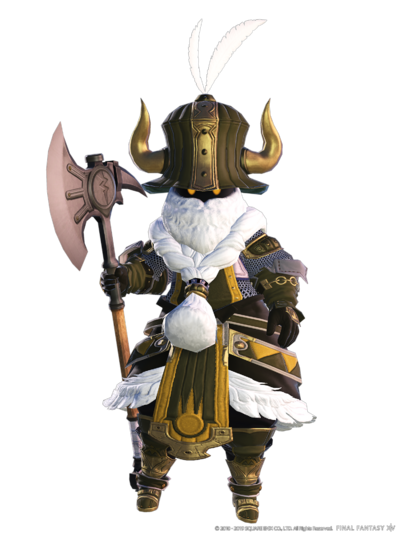 The Dwarves are a Beast Tribe from Shadowbringers (5.0).

This insular tribe dwells upon Mt. Gulg in Kholusia, its diminutive people rarely leaving the community of their birth. Dwarves are known for their skill at mining, metallurgy, and crafting mechanical marvels, but they themselves consider the true marks of dwarfhood to be respect for tradition and adherence to strict ancestral laws.

The Dwarves are the reflection of the Lalafell on the First.

Unlike the Beast Tribes on the Source and their relationship with the races of man, the Dwarves are considered a Beast Tribe due to their decision to shun living in the settlements of man in favor of remaining in their ancestral homeland.

Often seen in full armor, with a helmet and large, fluffy beards, their traditions forbid them from removing their helmets around any who are not members of their villages. If they were to remove their helmets, it would soon become common knowledge that despite appearances, their beards are actually elaborate scarves. Despite this, a full, robust beard is seen as very important part of Dwarven culture, and each tribe has a different ideal as to what constitutes a "good" beard.

While Dwarves do not have specific or strange diets, they are well known for being fans and connoisseurs of the drink. They build massive breweries and imbibe large quantities of ale. Despite the incredibly strong effects of Dwarven ale, it seems to have no effect in their ability to construct automata and massive war machines. On the contrary, it seems to actually improve their speed and skill in the craft.

The two tribes of Dwarves on the First, the Tholl of Tomra and the Gogg of Komra, are at some form of soft civil war, for reasons that are unbeknownst to anyone, seemingly even the Dwarves. Though they constantly threaten each other with full-blown war and violence, it never seems to amount to more than shouting matches consisting of some very colorful language.

While they share similar skill and a love for mining, metallurgy and ale, the two tribes have fairly diverse cultures. The Tholl, for instance, value growing a massive and full beard. They celebrate Beardtide once a year, wherein the chief of the village washes his beard, and the whole tribe celebrates with a giant feast.

The Gogg on the other hand value a clean, neat beard, using various soaps, oils and perfumes to keep their beards prim and proper. They also specialize in building transport machina that are useful for moving ore, metals and weapons around with ease.

Though they butt heads frequently, the two tribes often come together for the betterment of the First, for example helping construct the massive golem that took the Warrior of Light to the top of Mount Gulg.