Duty Recorder is a new feature which allows you to document duties for viewing at a later date. Playback controls include speed adjustment and chapter selection, as well as the option to switch the camera's point of view between characters, providing you with a powerful tool for refining battle strategies or simply capturing that perfect action screenshot.

With a level 70 Disciple of War or Magic who has completed the main scenario quest The Ultimate Weapon, speak to the Wandering Minstrel at Mor Dhona (X:21.7 Y:8.7) to unlock this feature with the quasi-quest 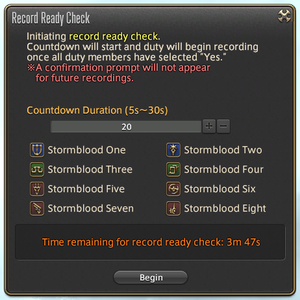 Please follow these steps to use the Duty Recorder:

Duty playback is only available in inn rooms.

From Duty, enter the Duty Recorder menu, and select the recording, followed by "Play."

Up to three recordings may be saved at once. Once this limit has been reached, any new recording will overwrite the oldest existing recording. If there are particular recordings that you wish to keep, they can be locked to prevent them from being overwritten. 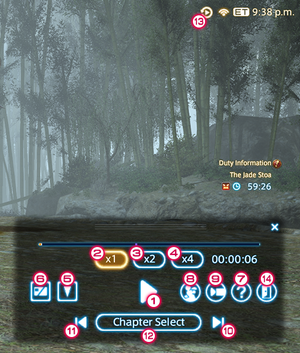