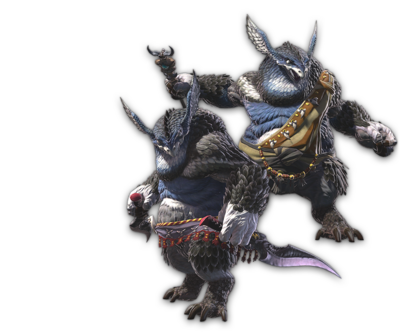 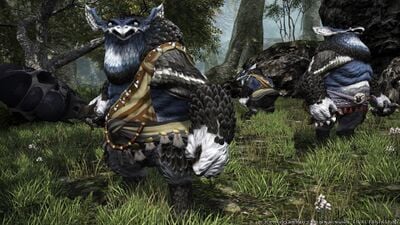 These avian beastmen dwell upon the floating islands of the Sea of Clouds, the tribe's existence unknown to the world below until the airships of Ishgard first rose to explore the sky's domain. Initial encounters with the races of man were peaceful, but in recent years the Vanu Vanu have grown hostile towards those who would encroach upon their homeland.

Commonly described as "plump birds", the Vanu Vanu have wide beak-like snouts and thickset bodies. The ponderous appearance of these beastmen is deceiving-their stout, feathered figures belying surprising agility and swiftness of movement. Predominantly avian in nature, the Vanu Vanu are nevertheless incapable of flight, with the tribes crossing from island to island on the backs of the serpentine Sanuwa.

In addition to the Wamouracampa and other vilekin larvae, Vanu Vanu rely on cloudfish to provide the bulk of their diet. Such staples are kneaded together with wildgrasses to make "catsfoot Chew", one of the race's signature dishes. The avian beastmen are especially fond of the springy texture of a chew made with freshly foraged grubs.

The Vanu Vanu tribes are defined by bloodlines, with those who share common ancestry gathering together under the rule of a single chieftain. ordinarily, these communities govern themselves independently of their kin, but shifts in power can lead to one tribe subjugating the members of another.

The Vanu Vanu have known scant contact with other civilizations, their lofty home sheltered from outside influence for years untold. The effects of such isolation can be seen in the beastmen's unchanging culture, and the comparatively primitive level of society. With the ore of the floating islands largely unsuitable for smelting, the Vanu Vanu have also remained ignorant of the art of metalworking. Consequently, their weapons are constructed from easily scavenged materials-mainly animal teeth and bone.

Despite their lack of "civilized" progress, however, the avian race is far from being dull-witted. On the contrary, only a few years had passed since the arrival of the Ishgardians before members of the tribes began speaking the common tongue with impressive proficiency. Efforts to avoid unnecessary bloodshed with the "Sundrop Dance"-a ritual exhibition performed before battle to frighten weaker opponents into submission-further demonstrates the reasoning nature of their society. There are many other aspects of their culture, however, such as the arranged fights between the monkey-like Paissa, which outsiders struggle to understand or accept.

Vanu Vanu names have gender specific suffixes: the masculine "Vanu" and the feminine "Vali". These words translate from the beastmen's tongue to mean "male tribe member" and "female tribe member", and are never used with animals or other species. Encounters between tribes might also occasion the mention of one's bloodline, e.g. "Honu Vanu, chief of Mighty Vundu!"

Traditionally, each tribe is associated with a specific adjective (such as the aforementioned "mighty Vundu"), but this is rarely heard in practice. The beastmen are, however, quick to append unflattering descriptions to their rivals' ancestral group.

Tribes of the Vanu Vanu

Vanu Vanu are skilled at trailing lines over the edges of their islands, and hooking the various species of cloudfish. As the tribe's primary means of procuring food, those beastmen who display a particular flair for skyfishing are the subject of much admiration and respect amongst their kin.

Lacking the capability for flight themselves, the avian beastmen breed a type of winged scalekin called Sanuwa to carry them to islands too distant for bridges. As well as serving as mounts, every part of a Sanuwa-its scales, its meat and even its bones-is valued for a variety of uses.