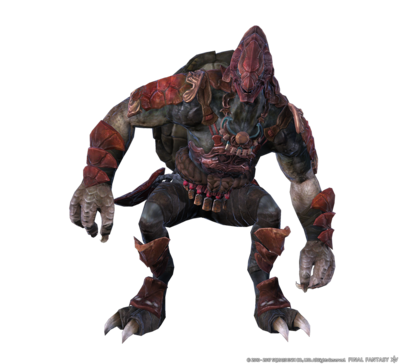 Easily recognized by the bulky shells upon their backs, these beastmen make their home in the waters of the Ruby Sea. Kojin hold the fervent belief that the kami of the Far East reside in all manner of objects-often valuable baubles or masterpieces of craft-and the entire tribe is consumed by the pursuit of such relics. The mercenary and merchant trades aid them in acquiring these treasures, and thus do they actively seek out contact with other races.

In addition to their distinctive natural armor, the Kojin are known for their large and well-muscled frames. Their hearts and lungs are also highly developed, allowing them to spend extended periods underwater on a single breath. One can often observe the shells of deceased Kojin displayed upon their gates around a settlement where they serve as spirit guardians-a custom which stems from the belief that the souls of especially learned and long-lived brethren linger for a time within their protective carapaces.

As ocean-dwellers, the Kojin's diet heavily favors the bounty of the sea. Fish, crabs, kelp-anything harvested under the waves is potential fare for the table. Due to the poor circulation of air within Tamamizu, however, the residents are reluctant to cook with fire, and consume much of their catch raw. But for those occasions when only a hot meal will satisfy, the Kojin have invented a dish known as "Gasame Stew", wherein the fire-aspected chell of the eponymous gasame is used to heat a medley of ingredients.

Known for their prodigiously long lifespans, the Kojin hold a great respect for the aged. It follows naturally, then, that it is the elders among them who are elevated to positions of authority. The actual powers of an elder vary between factions, with the militant marine commanders of the Red Kojin able to exert significant influence over their kin. Conversely, the Blue Kojin gather under a single elder, who provides the axis around which matters are languidly debated and resolved.

Drawing on the eldritch wisdom of their ancestors, the Kjin are able to create everlasting bubbles of magical force to enfold their underwater holdings, such as that which encapsulates the settlement of Tamamizu. Many of the Kojin's rituals and blessings are centered on life in the sea, and their command of water-and wind-aspected energies can even allow the surface dwellers the ability to breathe beneath the waves.

Another, better-documented aspect of Kojin society is their preoccupation with collecting treasures. Objects that could potentially harbor the spirit of a kami are gathered from myriad sources, and stored within a treasure vault constructed for the purpose. All Kojin once shared the vault on the Isle of Zekki, but due to the philosophical rift which now separates the Red and Blue, the latter faction has since built a new structure to house its relics.

The oviparous Kojin believe that when the soul that is to inhabit an egg falls from the heavens and into the sea, it first resides within a mundane object to ease the transition into the mortal realm. It is said that the choice of object is markedly influenced by the soul's own character, and thus is the item referenced when naming the newly hatched individual. A soul which values knowledge gained through study, for example, might infuse a paperweight, which in the tongue of the Far East would result in the hatchling being named "Bunchin".

The large and brutishly strong Red Kojin see military force as a solution in many situations, and have a long history of attacking other races in pursuit of treasures. Following the Garlean Empire's invasion, however, the Red found themselves outmanned and overmatched, and resorted to hiring themselves out to the Garleans as sellswords. As well as allowing them to retain their position in the region, this trade also enabled them to carry out their tribe's sacred purpose by requesting valuable objects in return for their mercenary services.

With their affinity for personal connections and bonds decreed by fate, the Blue Kojin prefer commerce as a means of amassing treasures. To that end, they are known for harvesting the riches of the Ruby Sea and bringing their wares to trade at the markets of neighboring nations. This mercantile practice serves not only as a tool for acquiring relics, but also as a way of obtaining fire-forged metal goods, a commodity the Kojin find difficult to craft beneath the ocean's surface.

The Kojin boast a high level of skill in working shells, coral, and other produce of the Ruby Sea into their crafted wares. In particular, the goods they inlay with mother of pearl are possessed of a distinctive beauty, and are prized as works of fine art.