Linkshell is a permanent chat channel in which a collection of players can communicate together, often formed to find players of similar interests with which you can play together.

There are a set number of roles that individuals can be promoted and demoted from; all ranging from low-to-high on their own, personal hierarchy for the Linkshell.

Each one of these positions allow the player a certain set of actions, with the Masters being given the option to invite new members; promote or demote leaders and members to leader or master rank; kick a player from the Linkshell; even disbanding the Linkshell entirely. Leaders on the other hand don't nearly have the same amount of priorities, but they do have access to inviting new members to the Linkshell and can even kick Members from the Linkshell.

The Members do not have access to these sort of permissions, but they can still chat throughout the global Linkshell chat, if they so choose to interact with other players who are online at the time.

If you're reading this and thinking where you might get your own Linkshell, you're going to want to go and find one of three possible NPC's who can give you the item; providing you follow their quest line until you finally get the item.

After locating one of these 3 NPC's, basically follow along with everything they want you to do and before too long they will reward you with the Linkshell.

In patch 4.3, players can form cross-world linkshells of up to 64 players from different worlds on the same data center. Players in a CWLS will be able to see other members' online status, and invite them to parties via subcommand.

Additionally, "Cross-world Linkshell" has been added to the chat window. Log filters, text color, and notification sounds can be adjusted. 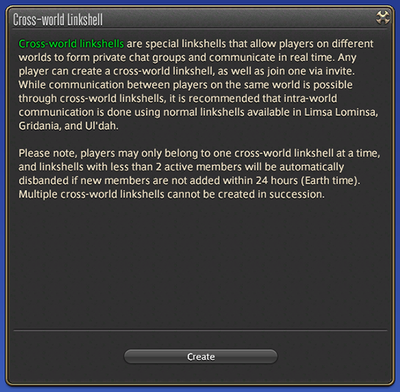 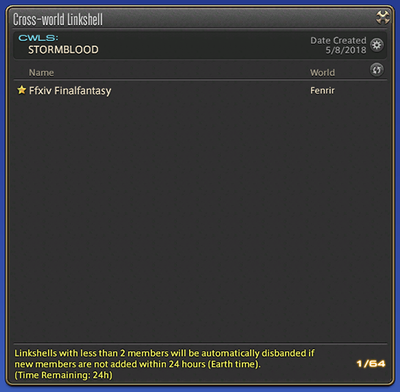 New cross-world linkshells can be formed by selecting "Cross-world Linkshell" under Social in the main menu.

Inviting Players to a Cross-world Linkshell

Use one of the methods below to invite players to your CWLS:

Upon being invited to join a CWLS, a player will be added as an invitee and receive an on-screen notification. If they accept, they will become a member.

Authority in a Cross-world Linkshell

The creator of a cross-world linkshell will automatically be assigned the rank of Master with the following privileges:

Those assigned the rank of Leader have the following privileges:

If the Master withdraws from the CWLS, the Leader─or, if there are no Leaders, the member─who has been a member of the CWLS longest will be automatically promoted to Master.

Players can choose to withdraw from a CWLS at any time. If a player transfers to a world on a different data center than the CWLS, they will be automatically removed.

Any CWLS that has less than 2 members─including the Master, but not invitees─for a full 24 hours will be automatically disbanded.