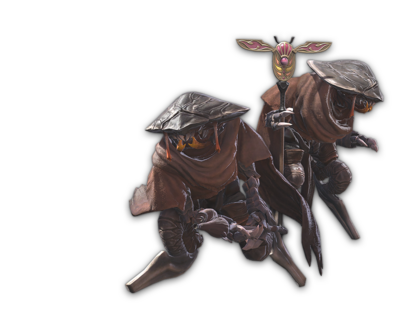 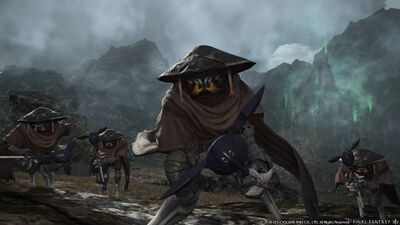 A tribe of insect-like beastmen known to inhabit the southern reaches of the Dravanian Forelands. Hunters first and foremost, they burn a sort of incense to defend their homeland from the Dragon threat. At the center of Gnath society sits the king-like "Overmind", its presence allowing its subjects to communicate without need of word or gesture.

Reminiscent of upright antlings, the Gnath have wide sloping heads, and their perpetually hunched backs are covered by rounded carapaces. Beneath the concealing mantles they drape over their segmented forms, their torsos and upper limbs are surprisingly gaunt. The Overmind, the nucleus of Gnath society, has a hyper-developed head housing a brain of extraordinary size.

The Onemind of the Gnath mix together meat obtained from hunting with various kinds of cultivated fungi, grinding all the ingredients into a highly nutritious-and allegedly extremely unappetizing-paste to be consumed by every member of the hive. In contrast, the Nonmind subsist on whichever dishes agree with their personal tastes, their tables set with everything from caelumtree fruit to the succulent flesh of juvenile nanka.

An individual Gnath-The Overmind-sits at the center of a matrix of thoughts known as the Onemind, to which all other Gnath are connected. What one Gnath feels, all feel; what one Gnath knows, all know. Fundamentally speaking there is no contention between the desires of individuals, and thus no need for a form of government.

Gnath society functions on the principle that "all are one;each one is the all"-the entire hive coordinating its actions as if it were a single entity. As such, each beastmen within the hive is treated not as an individual, but as an appendage of the Gnath's collective body. And in the same way as a person employs their hands for different tasks than their feet, the Gnath assign each "appendage" to the task to which it is most suited. Certain Gnath might serve best as soldiers, while others naturally excel at foraging, but in no case does the will or desire of the creature in question play a part in deciding its role.

Even when a Gnath dies, its memories live on with the surviving members of the colony. The existence of the Gnath can be thought of as the generational continuation of one complex mind, with new vessels being born to replace those lost in a constant process of regeneration. But just as the memories of youth fade over time, so too have the Gnath begun to forget events of the most distant past. Recent attempts to recall the history of ancient times have ended in frustrated failure.

The concept of individuality does not exist within the main Gnath society, and as such, they do not assign individual names. There is, however, a fringe colony of Gnath who have developed distinct personalities following the loss of their connection to the Overmind. These "Nonmind", or "Vath", as they are known, seek to distinguish their identities by mimicking the naming practices of other races. There appears to be non adherence to any particular rule or convention, with one Vath adopting the name of an Elezen hunter, one named after his obsession with new cuisine, and yet another titled simply for his chosen profession.

The survival of the Gnath colony relies on the success of its hunting efforts, and the beastmen go to great lengths to secure their hunting grounds from other predators. The observance of such behavior has likely contributed to the Gnath's reputation for being violently territorial.

The Gnath concoct incense from a wide range of herbs to produce a variety of effects, such as the vile-smelling "Silver Dew" used to ward off roaming dragons. The beastmen are also well practiced in the manufacture of firesand, and they commonly employ muskets in both hunting and warfare.