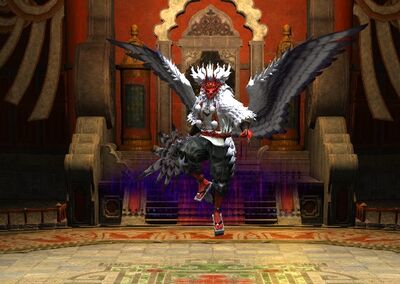 These winged folk have long been native to the lands of the Far East. Ordinarily, Tengu hide deep in the mountains, far away from civilization, but do have occasional contact with the societies of man. Known for their peculiar and unique sorceries, the tengu are often attributed as the cause of many an inexplicable phenomenon.

The most notable feature of the Tengu is the pair of broad, feathered wings sprouting from their backs. These powerful appendages allow the Tengu to fly effortlessly above any terrain, no matter how steep or treacherous, and return safely to their mountain abodes. Tengu are also famed for never revealing their true faces-though they might appear with avian or oni-like countenances, these are naught more than conjured illusions. It is said that these mystic disguises are further enspelled to burn away a Tengu'svisage upon his death.

Although Tengu have had dealings with man since ancient times, their culinary habits remain the subject of conjecture. Adamant as they are about concealing their faces, these secretive beings are never caught consuming food in front of others. They are, however, known to enjoy wines and other such beverages, and bottles of sake are always a prudent choice when presenting gifts to the Tengu.

The Tengu have no form of government. There have been instances of Tengu bands led by powerful individuals which have formed ties with rulers or prominent organizations, but these are the exception rather than the rule.

With their oral tradition of passing on the secrets of the ages, the Tengu have long been venerated as receptacles of ancient knowledge. In addition to their own, unique form of spellcraft, it is thought that the Tengu's wisdom is also the basis for the wind-earth-water aspected magicks of Geomancy. One of Doma's folktales even goes so far as to claim that the tutor of the young Ganen Rijin was, himself, a Tengu. But the winged folk are not always painted in such a benevolent light. Indeed, they are often accused of putting their esoteric knowledge to nefarious use, and have been historically connected to myriad plots and intrigue.