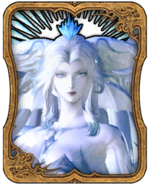 This ancient primal was created under the leadership of Venat to curb the towering might of Zodiark. Summoned with a lesser sacrifice of souls, Hydaelyn chose to unleash a blow which sundered not only Zodiark but the star itself, a desperate act which allowed Her to imprison His shattered essence upon the moon. In appearance, She closely resembles Venat, who gave herself to serve as the primal's heart.