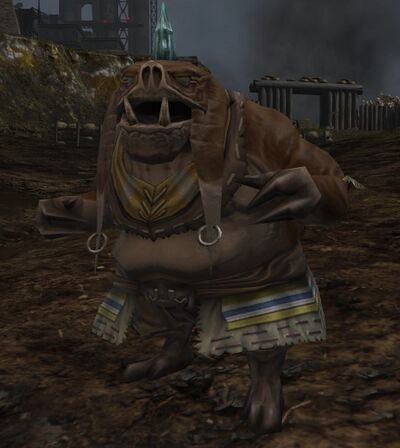 This race of beastmen is known for their corpulent appearance. The Seeq once dominated the temperate fields of Southern Ilsabard, but were forced to migrate to Othard after losing the war for their territory.

With their drooping ears and upturned noses, the Seeq might be described as boar-like. The race has a chronic tendency towards obesity, prompting insults which compare them with a giant's weight without the benefit of towering height. Despite their rotund bodies, however, the Seeq move with deceptive swiftness, capable of delivering devastating melee blows which carry the full force of their considerable mass.

The Seeq have an uncomplicated attitude towards food: anything edible will be eaten. And due to the amount they consume and the messy manner in which they consume it, they have earned a reputation for horrendous table manners. The disgust of other Dalmascans is such that children who show poor etiquette at meals are reprimanded with the expression, "You'll be a Seeq by dessert!"

Thanks to the race's keen sense of taste and smell, however, some individuals have made their mark as respected gormets. One notable Seeq publishes guidebooks which are followed with almost fanatical devotion in the Thavnairian city of Radz-at-Han.

Though capable of speech, the Seeq are not gifted with an abundance of intellect, and have thus struggled to establish anything beyond the most basic of social structures. Unable to form governing bodies on a nationwide level, their communities have been limited to haphazard gatherings of blood-related familial groups.

Anything which glitters is gold to Seeq, and the boarmen routinely festoon their bodies with gaudy gems and jewelry. Without the knowledge or facility to craft such things themselves, the adornments they favor are almost entirely the product of other race's expertise.

Crude of manner and bereft of morals, the average Seeq is likely to choose the path of least resistance when it comes to obtaining a desired object. And as that path generally equates to "stealing", no few of the unscrupulous beastmen turn to a life of banditry. This mindset also often leads to a career in grave robbing, or picking over the ruined remains of settlements ravaged by war or calamity. Such unsavory deeds have greatly contributed to the general perception of the Seeq as a race of brigands.

Taking advantage of their superior olfactory senses, some Seeq have made their fortune by sniffing out buried mushrooms of gourmet quality. These enterprising individuals are often referred to as "truffle hunters".