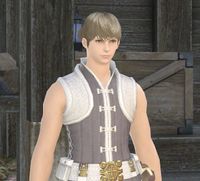 "Smithing isn't about forging the sharpest blade or the sturdiest suit of armor. It's about exceeding the expectations of our patrons and the limitations of ourselves."

At twenty and three, Drake is a genius weaponsmith with a bright future—though he himself has yet to realize this. He is not put off by rejection, and following a full moon and a half of persistence, so became the apprentice of his hero, Gerolt. Unfortunately, his master teaches him little, preferring to drink alone rather than spend time with the Midlander lad. Drake has had no recourse but to study by watching—and as a result, become highly skilled in his own right.

Drake is a Hyur found in North Shroud. Purcahsing Relic Weapon replicas require turning in a Zodiac Zeta Weapon as part of the Anima Weapon quest